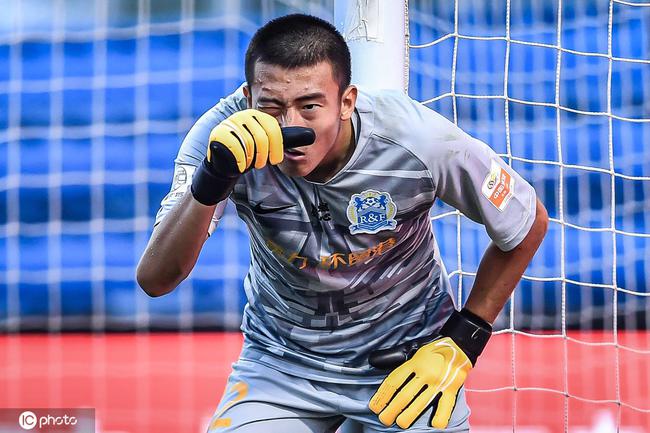 The second phase of the 2020 Chinese Super League is about to start. In the first 14 rounds of the league, Guangzhou R&F’s 21-year-old star Han Jiaqi “full attendance”, with a total of 50 saves, became the goalkeeper with the most saves in the Super League, and also helped his opponents with 3 zeros. Joining Guangzhou R&F in 2019, Han Jiaqi experienced the training of two coaches. Stojkovic once said that he is the future of R&F, and Van Bronckhorst turned this "future" into "now". He pushed Han Jiaqi to Xiang Zhongchao is on the big stage, praised his strong willpower and the potential to become a successful goalkeeper.

A few days ago, Han Jiaqi said in an exclusive interview with Information Times that as a newcomer to the Chinese Super League, he embraced the challenge with a learning attitude. In the future, he looks forward to playing for the country and competing in the 2022 Hangzhou Asian Games.

At the beginning of last year, Han Jiaqi joined Guangzhou R&F from the Portuguese Super League Avis Sports, signing a 5-year contract. Beijing goalkeeper Han Jiaqi, who was born in 1999, only started playing football at the age of 9, but with his talent and love, he played steadily and became the main goalkeeper of the Beijing Youth Team. He also represented the Beijing U18 National Games in the 2017 Tianjin National Games. At the end of 2017, Han Jiaqi received an invitation from the Portuguese Super League Avis Sports to begin his overseas study.

In 2019, Han Jiaqi received the "olive branch" thrown by many Chinese Super League teams, but he chose Guangzhou R&F. In his view, R&F is a special presence in the Chinese Super League. After joining, he became the Guangzhou R&F reserve team. The main goalkeeper. His debut in the Chinese Super League came off the bench in the 86th minute of last year's guest match against Suning. He also made an appearance in the FA Cup. "I cherish the opportunity given by the coach. Every game is a very important exercise." Although he had only sporadic appearances on behalf of the first team last year, he was still very grateful.

After R&F coach Van Bronckhorst coached the team, during Guangzhou R&F preparations for the league, Cheng Yuelei and Han Jiaqi got equal chances in the warm-up match, but in the end, Fan Shuai chose the young Han Jiaqi. On the one hand, his age is in line with the U23 player policy, and more importantly, Fan Shuai's recognition of his performance. "Very young and has potential. Although he will make mistakes, his willpower is very firm and he will not be easily hit by mistakes." Fan Shuai commented on it.

From the initial 0:3 and 0:5 losses to Shenzhen Kaisa and Guangzhou Evergrande, the team gradually recovered and defeated Dalian and Shanghai Shenhua, and finally lost to Shenhua in the top four key competition. The young Han Jiaqi experienced a series of challenges with the team.

In the first two rounds of disastrous defeats, Han Jiaqi, who had no major mistakes, was encouraged by Fan Shuai, “There will be some impact on confidence. After the first loss, Fan Shuai told me to believe in myself. But more At the time, Director Huang (Huang Hongtao) would give me more psychological and mental guidance. I lost 5 in Shenzhen. Although I definitely have a certain responsibility, I have never doubted myself. I learned as a young player. Playing this game with a mentality, I didn’t put myself in a high position. Director Huang also told me, let me not think so much, let me not carry the psychological baggage on my back, and just put in 100%."

The two rounds of the Guangzhou Derby attracted much attention. For the second time against Evergrande, R&F was beaten at the last moment. Han Jiaqi shed tears after the match. Xiao Han said that he rarely expresses his emotions in public. "I am the kind of person who is crying in the bed and will not let everyone see his fragile side. Derby does not need to be mobilized, everyone wants to prove themselves, including I. At that time, I just felt that the big brothers played a game, every point of ours is very precious, I feel very sorry for their performance, I think these are things that young players need to experience."

Han Jiaqi had a high-light performance in the Dalian division. He played against the Dalian native in the first round. He saved 9 times, setting the record of single saves in the Super League this season and helping R&F achieve zero blocks for the first time in 414 days. In 14 games, 3 degrees of zero seals, in addition to two zero seals of Dalian, also zero seals of the powerful Shandong Luneng.

For the first stage of the game, Han Jiaqi was most concerned about fighting for the top four key battles. R&F lost 0:2 against Shanghai Shenhua. "I feel that I am still inexperienced and have too much burden. I think this is also the case. It’s an experience.” Han Jiaqi said that in Dalian’s experience, he has become more mature psychologically. “I think I’m still young, and I’m still going to learn and improve and accumulate experience, hoping to become more mature.”

The 21-year-old Han Jiaqi is regarded by the outside world as one of the hottest newcomers of the 2020 season. He modestly said that he has not thought about it for the time being. Despite his young age, Han Jiaqi is not convinced by his "tender". He bluntly stated that many goalkeepers at home and abroad have played in the top league earlier than himself. "Like Wang Dalei, he played the main team at the age of 17, and I am still learning.

In the 2020 season, after Han Jiaqi, Wen Yongjun, Wu Chengru and many other players under the age of 21 joined, R&F has also accelerated the rhythm of "replacement". Especially after the departure of Zahavi and Saba, the team seemed to be more cohesive. "After Zahavi left, each of us wants to prove something, because football is a team event. I believe that as long as we fight in a team, we will Become more cohesive. I think the current R&F team’s greatest competitiveness is youth, hard work and unity."

After 14 games in the Super League and 1 FA Cup exercise, Han Jiaqi has also received more attention from the outside world, with both praise and criticism. "As for the comments of the fans, I basically have a normal heart, accept both good and bad. For. Personally, these games have given me a lot of experience, and they have also taught me a lot of truths, especially for me to understand that football matches cannot be given up until the last minute."

Han Jiaqi was once selected into the National Youth League. At his age, he is expected to compete in the 2022 Hangzhou Asian Games in the future. "As a player of the right age, I definitely want to play for the country. I believe that every player is the same. We must work hard. Especially us. It’s the host team and I will work hard to compete for the main position."